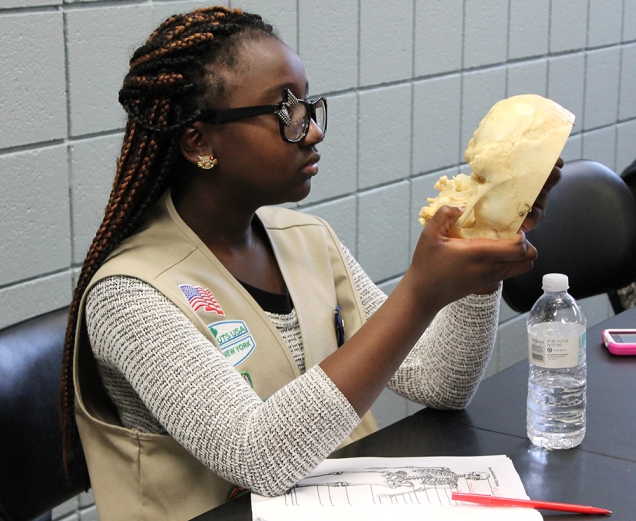 A Girl Scout studies the underside of a skull.

On Saturday, January 9, Girl Scouts of Western New York went to the University of Buffalo to learn about medical school. One hundred girls attended the program with 30 troop leaders and volunteer chaperones. The girls were all in the Cadette level, which includes students from 6th to 9th grade.

The Girl Scouts go to Med School program was run by volunteer medical students to get the Girl Scouts interested in pursuing a future in science, technology, engineering, or math (STEM).

Kaci Schiavone, a lead volunteer and 2nd year medical student, added, “We’re trying to get them as involved as we can. As long as we get them interested in science in general, we’re excited.”

Sember and Schiavone are both co-presidents of American Medical Womens’ Association, which has been organizing the program with the Girl Scouts of Western New York for a few years. 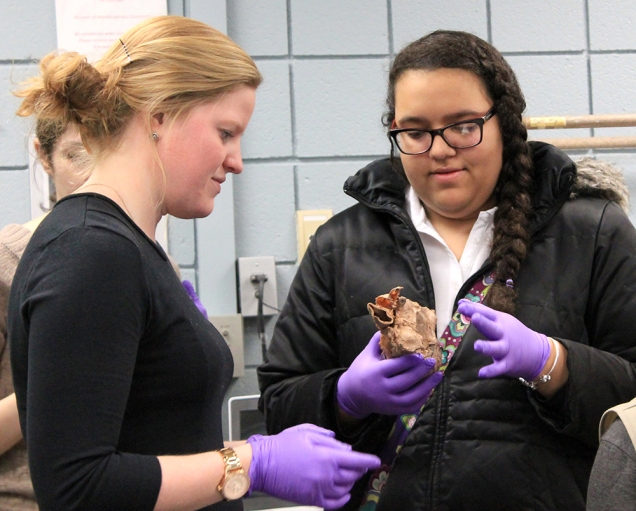 A Girl Scout gets a hands-on experience with a heart while med student Mary Kate Frauenheim explains the chambers. 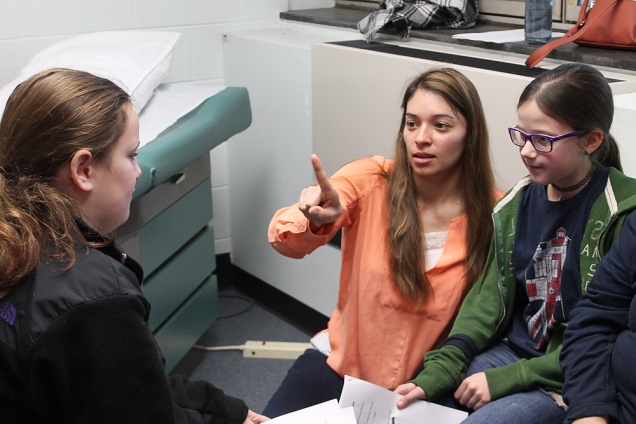 By moving a finger in the shape of an H, you can test certain cranial nerves for functionality.

The girls worked their way through seven stations to learn about different parts and systems of the body and what career paths work with each. Girls learned about the brain and cranial nerves, the musculoskeletal system, the abdominal region and nutrition, the heart and lungs, and the nervous system.

Many stations included real organs that were donated for scientific purposes to the school. Donning gloves, the girls were welcomed to feel what the organs looked like and while learning about their functions.

Penpa Bhuti, a 1st year medical student was a volunteer at one of the stations where she taught about hearts. She taught the Girl Scouts about the heart and its valves, plus had them listen to each other’s heart sounds through stethoscopes. She said she volunteered because, “I like to teach. That’s one of my other passions. I think that’s really cool to be able to share your knowledge with other people. It’s really nice to volunteer. It’s fun.” 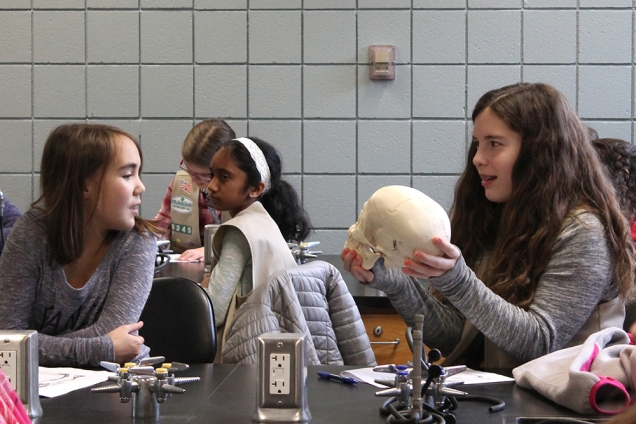 One girl shows off a real skull to another.

The Girl Scouts have fun getting a lesson in lungs.

Eighth-grader Hope Marshall and ninth-grader Courtney Jung from the Chatauqua Service Unit signed up for the program together. Both Girl Scouts want to work in or alongside the medical field one day.

“We signed up for this because we wanted to learn more,” said Marshall, “and we wanted to come and see how it was in the medical field.”

Jung added, “Most of this is interconnected to what we already know, so it’s helpful and informative and helps expand our knowledge about what we’ve already learned so far. I’ve wanted to be a pathologist for as long as I can remember.”

Marshall said, “I was thinking about being an engineer and I was going to maybe help out in the medical field by building machines to help with people’s problems.” She said a good example is that when a person gets a broken bone, they may need pins in their arm. She wants to find an alternate system that could help that person heal correctly.

Jung said that this program is great because she can narrow down her focus, but can get a glimpse into other possibilities. “Girl Scouts adds discipline and appreciation,” she said.

Using a stethoscope, they checked each other for healthy hearts.

At the end of the program, the Girl Scouts participated in a question-and-answer session with six medical students. Five of the six were Girls Scouts as children throughout the United States from California to Pennsylvania. They encouraged the girls in the audience to try out as many things as possible to know what they do and don’t want to do later in life. Many of the medical students had wanted to be veterinarians, but doing volunteer work in their teens changed their minds to caring for human patients.

Quinne Sember, a lead volunteer and a 2nd year medical student, said, “We just want to spark an interest in them and let them know that girls can be interested in science and medicine. This is the path to get to where we are.”