My Experience at Skills and Chills: The Girl Scout Difference

Even though I’ve worked at Girl Scouts of Western New York for nearly a year, Skills and Chills was the first opportunity I’ve had to attend a true Girl Scouting event. Co-workers told me how much fun I would have, but honestly I wasn’t really prepared for how right they’d be in the end.

For those who aren’t aware, Skills and Chills is an annual event held at Camp Seven Hills. While it is a GSWNY program, it’s completely run by volunteers. It’s the third of our Outdoor Progression series, following Tents Up for Daisies and Brownies and Ready Set Camp for Juniors and Cadettes. The first two focus on the skills you need to compete in Skills and Chills.

A glimpse of the teams after breakfast

When I arrived Saturday morning, I was immediately blown away. There were more than 200 people buzzing with excitement in the dining hall. Girls were dressed in costumes ranging from custom labels on a shirt to a full-on lumberjack outfit complete with a drawn on beard. I couldn’t keep the smile off my face.

A team called the “Lucky Lemurs” passing the time together

The atmosphere didn’t change despite the long day spent outside. It was hard not to feel good around a group of people who were just so enthusiastic about what they were doing. And I’m not just talking about the girls competing.

I’ve seen a lot of volunteers who just show up and do what they need to do at an event. They’re more preoccupied with when it ends than really focusing on the kids in attendance. I didn’t come in expecting this level of apathy, but I assumed it would be a similar feeling of I can’t wait until this ends.

To all our Girl Scout volunteers, I’m so sorry I underestimated you.

This volunteer drew faces for all the log sawing competitors, going as in-depth as they requested

What I found from the adults in attendance was something truly special. They were just all, without exception, so encouraging. The ones dressed up were just as into it as the members of their team. 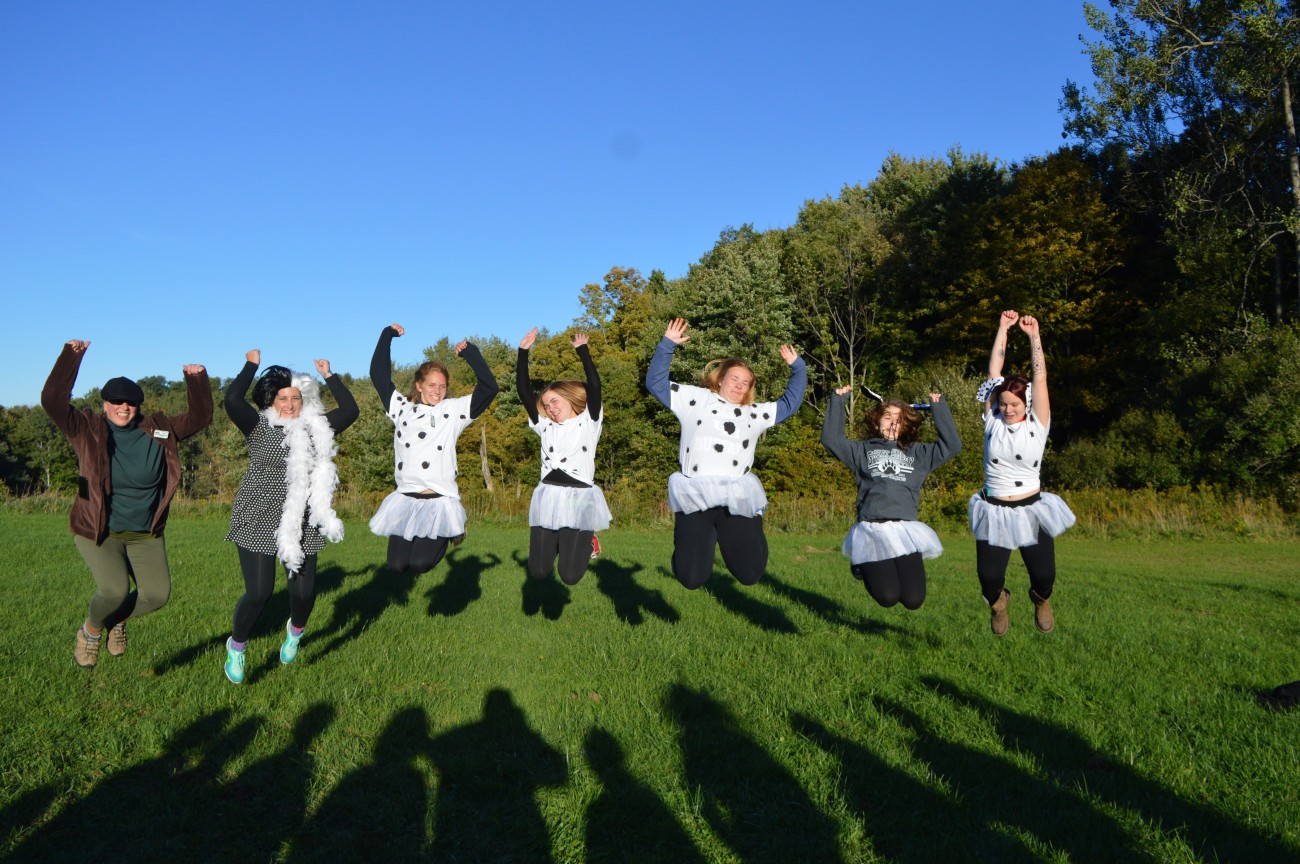 The ones judging the events never looked exasperated for frustrated, even if a team was taking a long time to complete their task. They patiently watched and offered words of support. When acceptable, they gave little pieces of advice to help the girls without compromising the competition. It was clear they were having just as much fun.

I spent time listening to volunteers in certain areas and it was hard to leave. They guided the girls through and cared about their learning. Skills and Chills is a competition, but it’s clear it’s still a learning experience. It doesn’t matter if a girl has practiced for an event or this is her first day, the volunteers remained happy to guide however possible.

Because my experience as a Girl Scout lasted less than one year, I thought about interactions I’d had in similar situations as a child. It’s not like every volunteer I’d encountered was negative, but none stuck with me quite like the helpers at Skills and Chills.

As the day continued, I didn’t hear the girls becoming frustrated with each other. They didn’t get mad at teammates when something didn’t go as well as  they’d hoped. The spirit of competition was prominent, but it never affected how they interacted with each other. No one was cutthroat or tried to puff themselves up. It was simply a group of girls doing their best, trying to win, but most importantly having a blast. 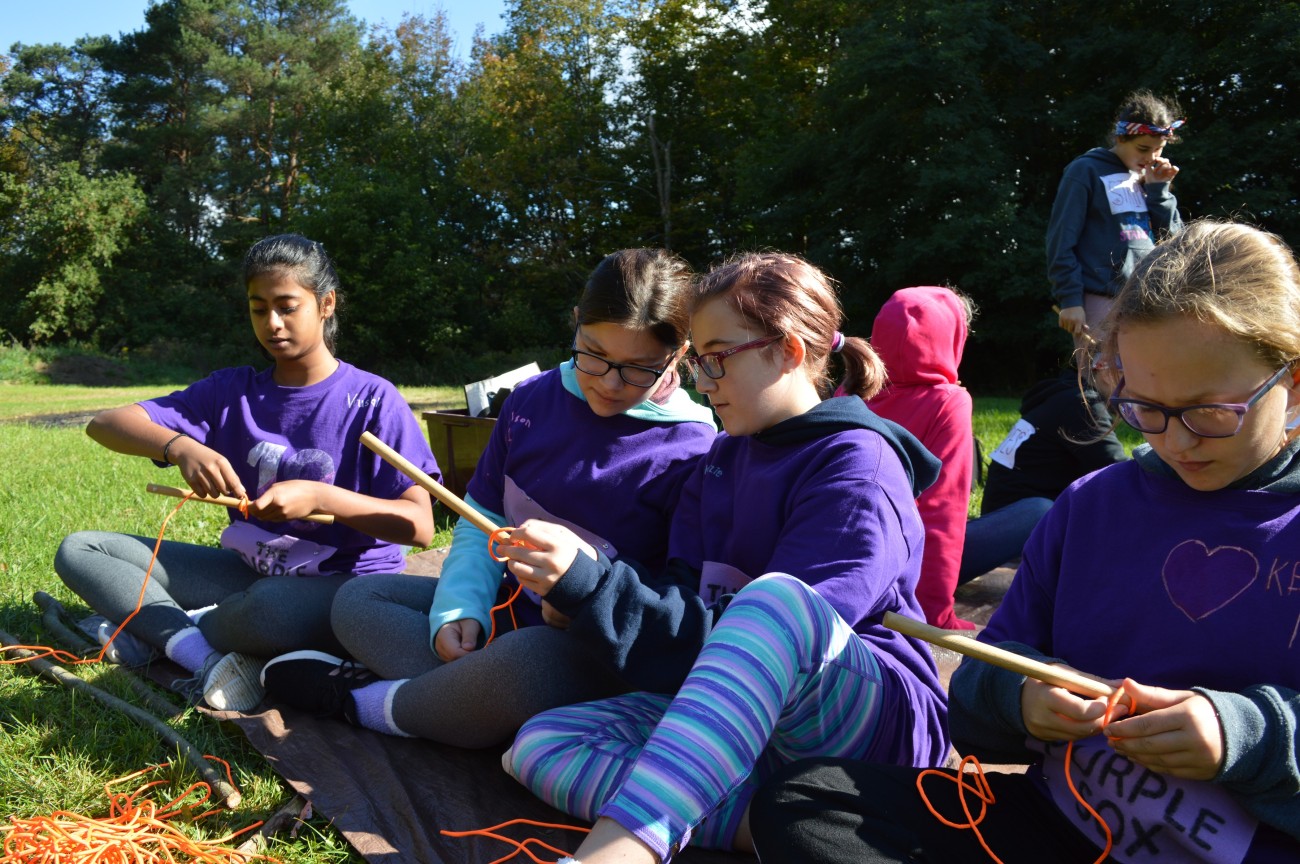 Girl Scout team members helping each other out

I believe in the Girl Scout Difference, but I haven’t always. I tried Girl Scouts when I was young but moved on quickly. Like too many people, I assumed they were all about crafts and cookies. Even when I was first hired, I told people I was conflicted about working here because I didn’t really believe in the organization.

It’s laughable how far I’ve come in a year. Actually, it only took about a day to realize Girl Scouts was so much more than I imagined.

Now I’m so into Girl Scouts I’ve signed up my niece and convinced my sister to become a co-leader. I’ve seen firsthand the impact of Girl Scouts and I want them both to experience the difference. I want my sister to help lead girls and watch her daughter grow. I want my niece to develop friendships in a space without competition and pressure. I want her to see that no matter what the world tells her, she’s capable of greatness in any area she wants.

I’ve believed in the Girl Scout Difference for awhile, but if I had any doubts, Skills and Chills erased them all. Never in my life have I experienced something like it, where the girls felt safe to succeed and fail and the volunteers cared about encouraging and making every girl feel important.

People are busy and there are other activities, but I know Girl Scouts is the best option for your girl. She gets to do a bit of everything and set herself up for a lifetime of leadership and success. Nothing is more important, because here’s the thing: we know success looks different for everyone. We don’t want to force your girl to do something she doesn’t want to or feels like she has to. We care that she finds her thing and never looks back.

That’s what motivates me every day at my job. That’s the Girl Scout Difference.